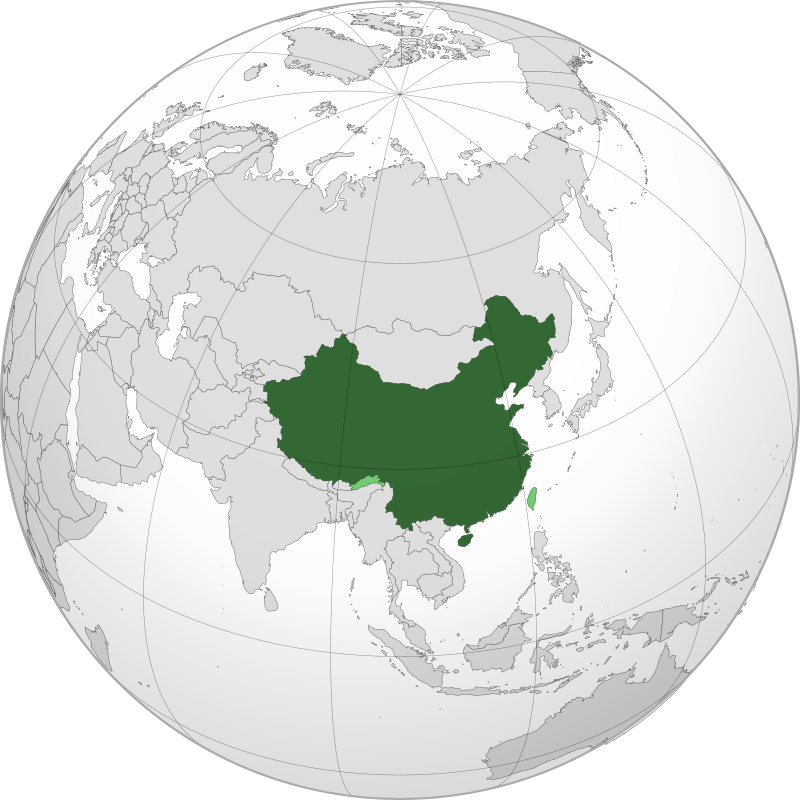 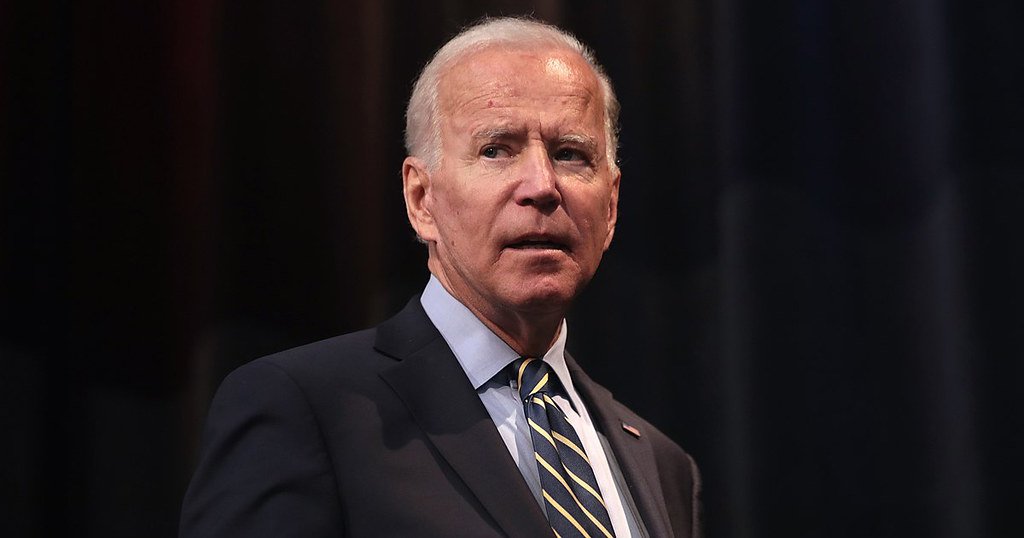 China Spends three times more on Infrastructure?  So What?

So China spends more on infrastructure!  Let’s agree with the President and agree they spend three times more.  Is this anything remarkable?  Is this on par with what we spend?  Is there some rational justification?  Does this put China at some strategic advantage?  Do they get some socio-economic gain? Do they put the United States at some severe disadvantage?

These are the logical and unanswered questions that arise from this seemingly important factoid the President provided in his first-ever press conference.  Like much of the rest of this press conference, his statements went unchallenged or, in most cases, even lightly probed for veracity.

So what does it mean that any nation spends multiples more on infrastructure than we do?  On its face, it could mean they are outpacing us significantly, or it could mean nothing, or it could mean they are ultimately declining as a significant competitor.  It is not the multiple of total dollars that is important.  The relative rate of the spending needs to be based on their size, landmass, population, or other metrics to provide any context to the measurement.  The fact represented could be an important one, or it could not be significant.  When I heard it, my involuntary laughter indicates that it feels meaningless to me. So I did what I wish more people would do; I took a look at the fact and broke it down for analysis.

The United States of America Statistics 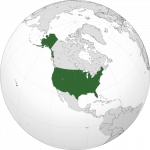 The United States feels like the largest place on the planet to our citizens.  As countries go, the United States of America ranks 3rd or 4th with 3.8 million square miles of land mass-including water.  We have a population of 330,163,116 as of March 26, 2021.

We are a large nation and have quite a bit of infrastructure.  And if you have traveled the U.S. as I have, it feels like it is a heck of a lot more than it adds up to.

The Peoples Republic of China’s Statistics 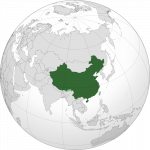 China is also a large nation and has quite a bit of infrastructure.  I have only traveled a little in China. I would have thought China’s geographic size was significantly more extensive than the U.S. This feeling was mainly based on people’s density and my understanding of the size of the population’s disparity to our own. 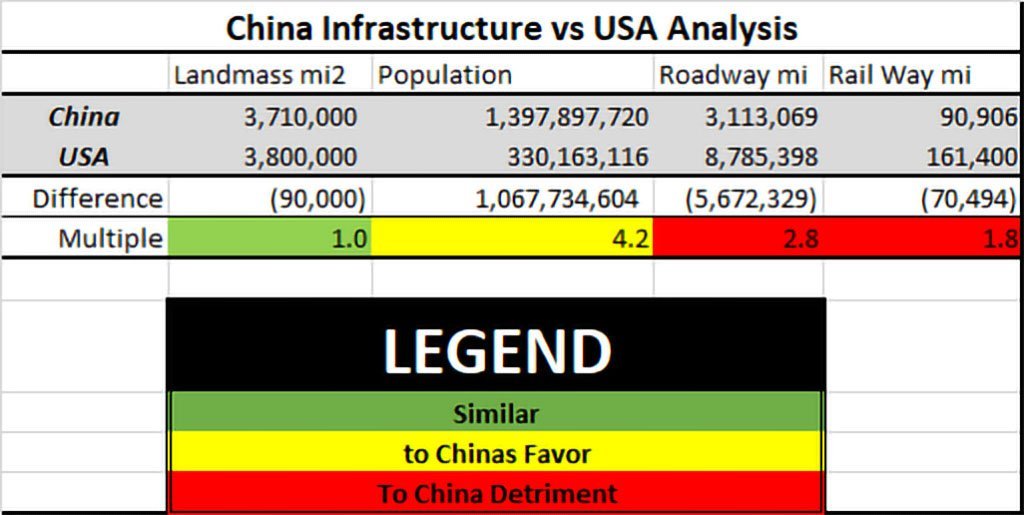 China occupies the same territory geographically as the USA.  So China should require about the same infrastructure as the US does to support its population in the same manner.

China has 4.2 times the population.  Unlike the USA, due to lack of infrastructure, a huge percentage of China’s population is concentrated in its cities.   Much of China’s landmass is largely undeveloped and does not support its growing population, causing the increased quality of life issues for city dwellers and rural inhabitants.

The USA has a 2.8 (almost 3) times advantage in roadway infrastructure.  As a result, while there is a significant population density allocated to the cities, the US population can fruitfully exist in the suburbs and rural areas and still maintain similar qualities of life.

Again the US has a 1.8 times advantage in the total railway mileage to support its population.  The development of China’s resources will be significantly limited as long as much of the nation is not connected by efficient rail transportation.

What this means economically

China is significantly underdeveloped when it comes to infrastructure to support the growth of its population.  Without the infrastructure, at least on par with the USA who is of the same size, their economy’s strength is crippled by this lack of infrastructure.  In contrast, China has had to develop its economy based on its cheap labor pool and ability to industrialize every part of their society to provide manufacturing and raw materials conversion industries based on the lowest price economies.  This is a strategy that is now failing.

As their population advantage failure increases, the socio-economic pressures will increase. China’s actions will need to become increasingly belligerent to offset the looming economic collapse unless they invest significantly in infrastructure.

China has been a significant competitor, but their time in the sun is rapidly waiting.  Their ability to continue to compete in manufacturing and dominate the world is rapidly closing.

Will their three times spend on infrastructure make them more of a threat?

Until China develops the same infrastructure level for transportation, energy, communication, they will not have the opportunity to stop the decline of the old benefit of their significant population and cheap labor.  Chinese workers now demand better healthcare, better roads, better public transportation, better housing, water, waste management, and a cleaner environment.  This demand is rising, and as these demands increase, China’s large cheap labor pool evaporates.  The demand for infrastructure drives demand for more infrastructure and domestic spending, which drives higher manufacturing costs and lower international competitiveness.

The threat is not their three times spend on infrastructure. The real threat is what happened if they do not find a way to catch up and develop the infrastructure to support their own population as the world moves on to the next lowest-cost manufacturer nation(s).

President Biden and his allies want to spend $3 trillion to show America’s people the democrat party is putting money in their pockets. Therefore, we, the people, should both be happy the people elected them and feel good voting them in again in two and then four years.

The reality for President Biden and the democrat party is that the nation is divided.  Some estimates that I subscribe to are that 20-25% is hard left, 20-25% is hard right, and 50% is in the middle.  The theory continues that it is now the middle 50% that determines the outcome of elections. Much of this “middle” is the middle class.

The real problem is no one is paying attention to the systemic core of the problem.  So President Biden and his people believe that giving away $3 trillion will significantly benefit and help the economy.  It will feel for a short time like it is helping. People will get new stimulus checks for, let’s say, $1,400.00, but a little math shows the folly of that feeling!

You ask, “why does this stimulus cost every person in the country?  They are taking it from the rich, are they not?”  The answer is that it costs us all because, while they will get some of the funds back in terms of higher taxes, they create the money out of thin air at first. So the buying power of the dollar is reduced by the proportional amount of new money printed.  Again some simple math.

The US GDP for 2020 was $20.93 trillion, a 2.3% decrease over last year. Or a 6.3% decrease from the year before.  If we add $3 trillion to the cash pool, with no real increase in tangible value, then all we do is dilute the dollar by 13%.  Further, the higher taxes drive up prices, and this triggers additional inflation.  We likely will see a 20 to 30 cents per dollar reduction in buying power due to the $3 trillion stimulus payment.

The other false narrative is that we stimulate the purchasing of more goods and services.  This is true, but the bulk of the goods we purchase come from China and other countries, not the USA. We are still a net consumer nation, not a producer nation, despite Trump’s efforts to change this, some of which worked. So we will spend more money than our nation brings in and we need to print more money out of thin air to cover the debt.

If this is all true, Why is President Biden trying to scare us by saying China will spend three times our amount on Infrastructure?  Because he wants us to all go along with printing $3 trillion of new money to pay to some people, so they falsely feel better. He does this because he wants them to vote for his party again in two years and then again in 4 years.

If you do not believe this is how it works. You can read Medicare-Medicaid: A Chicken in Every Pot. or you can listen to Our Youtube Channel Show: JFK-LBG Increased Cost, Expectation, and Politics. Starting at 28:32.

Is this fear-mongering?  You be the judge. 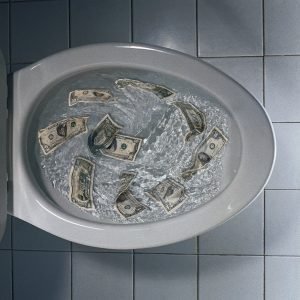 Do you think you know why stuff is costing more? Probably not. We explain the pending economic stimulus disaster in 10 minutes. 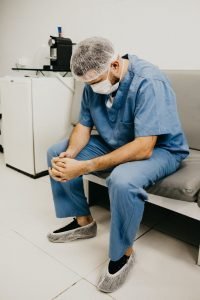 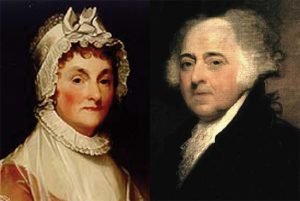 I originally wrote this political article on September 11, 2011.